Studies of the Art and Artists Inspired by the Writings of J.R.R.Tolkien
Post Reply
114 posts

May you have joy in the reading, Lyanness! Liv would have looked good in a burlap bag, I'm sure!

Which brings us to Tolkien's use of the color grey (we Yanks don't spell it that way, but I honor the Professor's spelling!). I remember realizing when I read LOTR as a child that anyone who had grey eyes was a good guy. I'm sure that this will provide some critic with more evidence that JRRT was a racist, but I think that he was trying to capture the feel of someone who had an honest face and clear vision. It may also be related to the northern-ness that he loved.
Sing and be glad, all ye children of the West,
for your King shall come again,
and he shall dwell among you
all the days of your life.
Top

Merry wrote:I think that he was trying to capture the feel of someone who had an honest face and clear vision.

You could be right there, Merry. Perhaps Mabel, Tolkien's mother, had grey eyes, or Father Francis Morgan! I've always thought of Arwen's grey as a sort of shimmering elven, twilight colour. Gandalf also wears grey (at first) which transmutes into white. His grey is almost a disguise, or a white-in-waiting! and of course Aragorn has "keen grey eyes".
"Torment in the dark was the danger that I feared, and it did not hold me back.
But I would not have come, had I known the danger of light and joy."

I love that, 'White in waiting'

The elves are quite often described as clad in a soft grey - the elves of Lothlorien that greet the Fellowship are clad in 'shadowy grey' and their ladders are 'silver-grey and glimmering in the dark. It's the colour of twilight and of all things seen in moonlight and starlight. Of course, the trunks of the Mallorn are also grey.

In my mind it's associated with silver, gentleness and softly lit night - but not the dark where evil lurks, or the grubby colourlessness (is that even a word

?) of things that hide from the light.

I've thought of another blue - the blue flame that appears on the elven-made Sting when orcs are near!
Now let the song begin! Let us sing together
Of sun, stars, moon and mist, rain and cloudy weather...
Top

Yes, Iolanthe, I think that Tolkien's use of grey is unusual. It doesn't seem that many people like that color or associate it with anything good or beautiful--at least judging by how many women color their grey hair!
Sing and be glad, all ye children of the West,
for your King shall come again,
and he shall dwell among you
all the days of your life.
Top

It is unusual and he uses it a lot. We even have the Grey Elves and the Grey Havens!
Now let the song begin! Let us sing together
Of sun, stars, moon and mist, rain and cloudy weather...
Top

In South Africa, there is a population in which people have hazel eyes that turn to grey in their older age. My dad has grey eyes, my partner also has grey eyes and my little brother has hazel eyes, which turn grey in rainy weather, and so do 4 of my cousins. Me excluded, unfortunately. I wish that those genes of my father were passed to me.

As Tolkien was born here, I'm sure he knew people with grey eyes.
As the colour is repeated in his literature, I'm sure that the colour reminded of him of someone dear to him. It could have been his mother or father, yes. But what of his wife? Anyone know what colour her eyes were? Apparently she meant more to him that anyone or anything.

If I was as in love as he was, I would want to include my beloved in my literature in anyway that I could.

I gave hope to men, I have kept no hope for myself.
Top

Edited to add: Hey! This might explain why I always thought that Arwen's coronation dress in the movies was all wrong!)

One shouldn't compare movies to literature when it comes to colour schemes.
When working out pallets for movies, the designers not only look at the mood that the colour provokes, but also how the actors/actresses look in those colours. I agree, green shouldn't have been used in the coronation scene in LoTR III, but it did appear to make Liv Tyler appear "out of this world" and it grasped the movie goers attention.

I'm not that found of that colour either in the context, but it's supposed to be fresh spring green and symbolize rebirth, a new age etc. Think I read that in some companion plus on a sign at the LOTR exhibition. It makes sense, even if Elessar is the one mostly connected with green, not Arwen, but I think she tries to get in his favour.

I'm so glad Tolkien felt the same way as me about them.

I have nothing against warm red bricks, but these sickly yellow, usually dirty or at least soot-blackened bricks are just horrible. Made from local clay here in the south of Sweden. Unfortunately some modern architects have ordered new bricks in the same colour to an additional cost, crazy people

, to keep with the old building tradition.

Can't they understand every normal person thinks they're ugly?

I'm a sensitive soul, you know, but I've heard others feel miserable around yellow bricks as well.

I don't know about English, but in Swedish there are like nursery rhymes about the primary colours describing them and "gult är fult" (yellow is ugly) is a well established fact.

And "grönt är skönt" (green is beautiful, fair, nice) says it all.

This colour discussion is really interesting, especially to me as a synaesthethic, I happen to see colours and feel shapes or surfaces

in letters and words, not that unusual, I've heard.

Grey is a very appealing word to me, I can see why Tolkien loved it.

"Grå" in Swedish doesn't at all have the same connotations for me.

, cold and harsh, not as soft and beautiful as grey. I can also see why Tolkien chose his heroes to have grey eyes, they see things beyond what is there at first look. My own eyes shift, depending on mood and light conditions, from a nice greenish blue over normal greyish blue to a kind of piercing grey that scares the hell out of me in the mirror.

Out of doubt, out of dark, to the day's rising
he rode singing in the sun, sword unsheathing.
Hope he rekindled, and in hope ended;
over death, over dread, over doom lifted
out of loss, out of life, unto long glory.
Top

I know what you mean. Yellow brick seems to be popular everywhere these days. In the past, in South Africa, we used to build with whatever colour brick was available and then plaster them and paint them. These days face-brick has become more popular, especially bricks made in Johannesburg, which has a sandy yellow appearance and every part of the country is ordering and using those bricks!! Im completely embarrased

to say this, but my father - who is a builder - is building a cottage/granny-flat in his back yard out of yellow bricks

I hope that this trend ends soon and that people start realising that RED facebrick, especially the deeper red, actually looks much more appealing.

I gave hope to men, I have kept no hope for myself.
Top

One of my Christmas presents under the tree this year was a somewhat rare find and I am delighted with it! 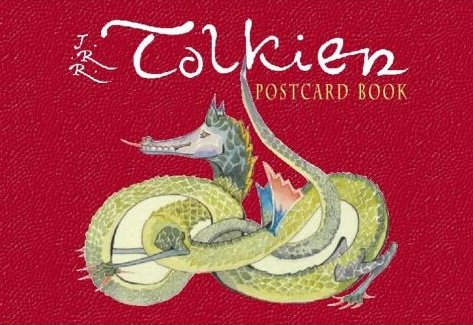 My niece found me a new (as opposed to used) copy of the small Tolkien Postcard Book and it is a delight. It was printed in 1998 by Harper Collins but I believe it is now out of print. She said the seller on eBay only asked for it at the original $13.50 retail, but I see that there are other copies being offered online at MUCH higher prices.

The postcards are all original Tolkien artwork and are small but brilliant...a true little gem of a book. I must have been a good girl this year.

What a great gift! What other illustrations are included?

Merry, the postcards include...

1. Bilbo Comes to the Huts of the Raft-elves
2. Christmas 1933
3. The Gardens of Merking's Palace
4. The Forest of Lothlorien in Spring
5. Rivendell
6. Moria Gate, upper section
Moria gate, discarded bottom section
7. House Where 'Rover' began his Adventures as a 'Toy'
8. Glórund Sets Forth to Seek Túrin
9. The Hill: Hobbiton-across-the-Water

. What a great present - It's got all the best ones in it. I love that little dragon on the cover too!
Now let the song begin! Let us sing together
Of sun, stars, moon and mist, rain and cloudy weather...
Top

And confused: are there two Lothlorien paintings by Tolkien? The only one I remember is set in the fall, I think--all gold leaves. Is there one that is green?
Sing and be glad, all ye children of the West,
for your King shall come again,
and he shall dwell among you
all the days of your life.
Top

Merry, if you have the book, J.R.R.Tolkien Artist and Illustrator, it is on page 162 and is titled (by Tolkien) The Forest of Lothlorien in Spring.

I am not sure I have seen another depicting Lothlorien.
Riv Res

Wow what a cool gift. I love the cover as well and the list is a long one. Lucky Auntie!
Aiya Earendil Elenion Ancalima!