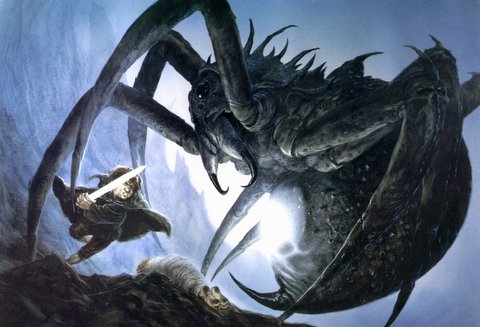 Just for fun we thought we’d ask you who the best monster in Middle-earth is and why. There are several criteria to think about while you chose the ‘best’. It could be the scariest, the most inventive, the most interesting or the one that has the biggest impact on the story. I've picked monsters with character or an individual role to play, but have stuck in an ‘other’ option in case you just have to go for Trolls or Fell Beasts. I've also left out Gollum, horrible as he is, because I think a real monster should start out as they mean to go on.

So cast your vote and let's see who the Monster with the Mostest really is!
Now let the song begin! Let us sing together
Of sun, stars, moon and mist, rain and cloudy weather...
Top

Ok, I've cast my vote and I've gone for Glaurung. I just love dragons and Tolkien's descriptions of him are magnificent. If I had my books with me at the moment I'd say more! Ungoliant certainly does the most damage when she destroys the Two Trees and she'd win hands down for sheer skin-crawling horror but Glaurung is something else and the devastation he wreaks in Túrin Turambar's story is so personal.
Now let the song begin! Let us sing together
Of sun, stars, moon and mist, rain and cloudy weather...
Top

Yes, good point, Iolanthe. I suppose that we make our decisions here based on the definition we have of 'evil' or 'monster', as you point out in your introduction. Aristotle thought there were three kinds of 'bad' persons:

1. Someone who knows what the right thing to do is, doesn't do it, but feels regret for what he/she has done.

3. Someone who doesn't have the use of reason and does bad things randomly.

Aristotle tells us that we feel more fear for the third person, but the second person does more harm. I think this explains why I voted for Ungoliant. I don't think her destruction of the Two Trees was driven by thought, which makes it scarier to me. But I can see other arguments as well.
Sing and be glad, all ye children of the West,
for your King shall come again,
and he shall dwell among you
all the days of your life.
Top

I also vote for Ungoliant, the devourer whose appetite knew no bounds. According to The Silmarillion, "some have said that she ended long ago, when in her uttermost famine she devoured herself at last."

I find Glaurung to be that sort of evil that finds satisfaction in the pain of others. The Ungoliant is just voraciously evil and it seems to be the case with Shelob. She hunts for sweeter meat and not power, for she is in her own right just another fell fact of nature.
I believe the Professor even comments about the nature of greed in dragons in the Hobbit. They might not know the true valure of a single piece of treasure they hord, but will cause all fury to be unleashed if that piece has gone missing.
Bruce
Mornie utlie
Believe and you will find your way
Mornie alantie
a promise lives within you now
Top

For me it was a tough choice between Ungolianth and Shelob just because spiders (even teeny tiny ones) give me the heebie-jeebies. In the end I voted for Ungoliant because she appears to be more powerful than Shelob.
Namarie,

Yes, given a choice between Ungoliant and Shelob I'd vote for Ungoliant. That quote Lindarial posted - "some have said that she ended long ago, when in her uttermost famine she devoured herself at last." - really is a yikes!!! That is all consuming and then some.

Ungoliant is in the lead by one point at the moment with Glaurung close behind. The other monsters are eating their dust. And just as it is getting interesting I'm off on holiday for a week......

Now let the song begin! Let us sing together
Of sun, stars, moon and mist, rain and cloudy weather...
Top

.
Now let the song begin! Let us sing together
Of sun, stars, moon and mist, rain and cloudy weather...
Top

A bit of a tough choice here.... for pure creepy fear i would have chose Ungoliant or Shelob cos like Airwin I too hate spiders!

but for me I have voted for the Balrog of Moria mainly because of its origin. Originally a Maiar, it disturbs me the thought of how corrupt and subtle evil is and how it can evolve from "good" sources.

What have I got in my pocket?
Top

Good thoughts, hope: I know what you mean. I suppose the Maia had to have been good originally, in Tolkien's metaphysics, although it's hard to imagine what good Balrogs mights have been like.
Sing and be glad, all ye children of the West,
for your King shall come again,
and he shall dwell among you
all the days of your life.
Top

Merry, since the Balrogs began as Maia fire spirits, I have always imagined that they originally were quite beautiful in appearance (fire is quite lovely) but became grotesque as a result of their fall into evil with Melkor/Morgoth. Based on the way Morgoth deployed them as described by Tolkien, they seem to have become Morgoth's bodyguards and enforcers, for example:

They rescued Morgoth from Ungoliant;
They were turned loose on Feanor;
They fought in the train of Glaurung the dragon at the Dagor Bragollach and the Nirnaeth Arnoediad;
They guarded the Silmarils; and
They played key roles in the Fall of Gondolin (slaying both Ecthelion of the Fountain and Glorfindel of the House of the Golden Flower), before all except a few (including the Balrog of Moria) were destroyed by the Valar in the War of Wrath.
Lindariel

I'm glad the Balrog has got a vote. I was terrified by that whole Moria sequence the first time I read the book.

Balrogs in the train of Glarung at Dagor Bragollach and the Nirnaeth Arnoediad? I'd forgotton that

. Wow, that's a terrifying thought. Imagine that lot coming towards you!
Now let the song begin! Let us sing together
Of sun, stars, moon and mist, rain and cloudy weather...
Top

Thanks for the summary, Lindariel. I can also see your image of Balrogs as beautiful, before the fall. Another question: are Balrogs rational beings? If they are, and it's hard to imagine a demigod as not being rational, it's so unusual that Tolkien made them without language.
Sing and be glad, all ye children of the West,
for your King shall come again,
and he shall dwell among you
all the days of your life.
Top

We just don't know enough about the Balrogs from the Professor's writings to know what kind of language or communication abilities they have. In The Silmarillion, references to the Balrogs are pretty much limited to descriptions of their roles in battle and serving Morgoth. There certainly aren't any passages that provide opportunities for them to communicate with anyone.

The only real opportunity to have a Balrog communicate is in the Bridge of Khazad-dum chapter in LOTR. Careful reading of that chapter gives us a few vague clues that are certainly open to multiple interpretations.

First, recall that Gandalf tried to shut the door to the Chamber of Mazarbul with a spell only to have a counter-spell thrown at him by something he had never encountered before. We later learn that this something is the Balrog. After this encounter through the door, Gandalf tells the Fellowship, "I have met my match, and have nearly been destroyed." Whatever the counter-spell was, Gandalf perceived it and understood it as such, so the Balrog must have had some ability to cast a spell that could be communicated to Gandalf.

Later, in the scene at the Bridge of Khazad-dum, after Gandalf utters his first challenge, "You cannot pass . . . . I am a servant of the Secret Fire, wielder of the flame of Anor . . . The dark fire will not avail you, flame of Udun . . . You cannot pass!" Professor Tolkien writes that "The Balrog made no answer." This seems to imply that the Balrog was capable of responding but chose not to, although I suppose the response could be an action or some form of psychic communication rather than speech. Also, after Gandalf breaks the bridge with his staff, the Balrog falls into the abyss with "a terrible cry," so we do know that it is at least capable of making sound.

In most fantasy literature, spell-casting creatures are usually capable of some form of speech or communication. Clearly, the Balrogs are intelligent powerful creatures capable of understanding and executing Morgoth's orders. I don't think it takes much of a leap to postulate that they have their own form of speech.
Last edited by Lindariel on Thu May 11, 2006 3:24 pm, edited 1 time in total.
Lindariel

Outstanding, Lindariel! I now see Balrogs in a whole new light. I knew they used to be Maiar but had never thought it through to consider that they must be capable of speech and spell casting, and yet all the clues are there as you've pointed out. It makes them even more terrifying, doesn't it? A match for Gandalf that's more than just strength and fire.
Now let the song begin! Let us sing together
Of sun, stars, moon and mist, rain and cloudy weather...
Top
Post Reply
41 posts

Return to “A Bit Of Fun”