by Philipa
Flight To The Ford 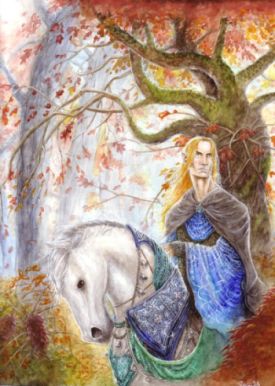 
With Frodo wounded by the “pale king’s” evil sword the company must move on to reach the safety of Rivendell. In this chapter we see Strider as a healer and someone much closer to the Elves then first thought. Sam is still wary of Strider but must trust him to keep them from harm. The travelers visit a place of Bilbo’s past and the mood is uplifted if only for a short while. With the Black Riders on their heals can Frodo and his companions make it across the Bruinen in time? We know the answers so let’s discuss this chapter together.

House Rules
by bruce rerek
The pace of this chatper picks up and slows down. Contrasts between light and dark again are seen in Frodo's waning of ease in growing darkness and feeling better as morning approaches. The Professor knew well the cold and comfortless breakfasts of the Somme, to be wet without dry clothes or much in the way of keeping dry. The layering of the past is well done with the Trolls and the ruins of what was once the Northern kingdom. The healing of Athelas is introduced in the first book and finishes in the Houses of the Healing.
Glorfindil's presence in the Third Age does make for some interesting questions. Last we had seen of him was in battle with a Balrog where both Elf and Shadow and Flame fell into the depths of the Encircling Mountains above Gondolin. How did he survive this contest and did the grace of the Valar return him like Gandalf after he threw down his enemy and smote his ruin upon the mountain side?
I rather enjoy that although the witch king could silence Frodo, he could not silence the fundamental power of water. The horse and his rider were cast unto the sea, hmm, I think I hear Handel calling.
by Philipa
I like this chapter. To me it was the gateway between just a journey being hunted to a huge urgency to reach Rivendell. It wasn't until this chapter that I began to warm up to Aragorn (I can hear you groaning

). But after reading he had knowledge about healing herbs (with the addition of Elvish lore in the chapter beforehand) I was liking this guy more and more.

Glofindil was a respet from the bedragled bunch of Hobbits and Strider. He seemed to breath life into them. And bruce good thoughts regarding how he came to be in there when his life was in such turmoil at the Encircling Mountains. Perhaps Tolkien fancied the brave fellow and brought him into the next age. I must look at some maps to see if the Encircling Mtns were geographically close to Rivendell. And whether the same branch of elves he was from lived in Rivendell with Elrond.

More questions and not much leisure time today.
by Lindariel
Ah! The issue of "The Two Glorfindels"! Here's what The Encyclopedia of Arda has to say:


The Problem of the Two Glorfindels

With the possible exception of Tom Bombadil's identity (and - of course - the wingedness or otherwise of Balrogs), there is no more hotly debated topic than the ultimate fate of Glorfindel. Were Glorfindel of Gondolin and Glorfindel of Rivendell the same person?

The only real resource we have to answer this question is in The Peoples of Middle-earth (The History of Middle-earth Vol. 12): XIII Last Writings, Glorfindel. Christopher Tolkien dates the notes he gives here at 1972, the year before his father's death.

These notes clear up one question immediately: at the time of the writing of The Lord of the Rings, Glorfindel of Rivendell was not conceived as the same character as Glorfindel of Gondolin. Tolkien says, 'Its use [i.e. the name 'Glorfindel'] in The Lord of the Rings is one of the cases of the somewhat random use of the names found in the older legends ... which escaped reconsideration in the final published form...'.

Tolkien was far from happy with this state of affairs, however, and it seems that he intended to reconcile the problem by uniting the two strands of the story. In summary, the notes tell us that Glorfindel's spirit returned to the Halls of Waiting, but was after a time re-embodied by the Valar. He then returned to Middle-earth (either in the mid-Second Age, or as a companion of the Istari in the Third). For the full story of his return, refer to The Peoples of Middle-earth.

The question of Glorfindel's identity, then, brings us to a much wider, and highly relevant, question. Can we accept a writer's personal notes, whether written in preparation for a published work, or simply for personal satisfaction, as part of that writer's 'canon'?

The importance of this question is highlighted by the essay entitled The Problem of Ros in the same volume of The History of Middle-earth. This is an extensive disposition on the origins and meaning of the syllable ros in names such as Elros. The details need not concern us here: what is relevant is the fact that, after its composition, Tolkien noticed a detail in the published Lord of the Rings that essentially negated the discussion. He dismissed the body of The Problem of Ros with four words; 'most of this fails'.

But what if he had not noticed this inconvenient fact (that Cair Andros had already been interpreted, and disagreed with his conclusions)? What if he had noticed, but had failed to record the fact? Would The Problem of Ros now be considered part of the 'Tolkienian' canon in the way that many regard the notes on Glorfindel? Questions like this show that we cannot simply take such notes on immediate face value.

Despite this, the Glorfindel notes lead many to see his re-embodiment and return to Middle-earth as 'fact' (and not a few have e-mailed us to remind us of this!) The purpose of this rather lengthy aside, though, is to show that we cannot view these 'events' in such concrete terms. This is the reason that the 'two Glorfindels' have separate entries on this site. This is not because we do not believe that Tolkien saw them as different embodiments of the same character (as we have seen, there are strong indications that he did), but simply because there is no definitive, published, proof of this.

Personally, I like the idea of Glorfindel of Rivendell being the same spirit as Glorfindel of Gondolin, reborn from the Halls of Mandos and returned to Middle-earth to aid Elrond, who is essentially functioning as the last remaining High King of the Noldor, although he refused to take that title after the death of Gil-Galad.

Glorfindel of Gondolin died saving the lives of the survivors of the sack of Gondolin, one of whom was the young Earendil. It makes sense that he would return to aid Earendil's son.
by Philipa
Great find Lindariel, I especially enjoyed this four word theory buster...'most of this fails'.

But they did conclude at the end...'The purpose of this rather lengthy aside, though, is to show that we cannot view these 'events' in such concrete terms. This is the reason that the 'two Glorfindels' have separate entries on this site. This is not because we do not believe that Tolkien saw them as different embodiments of the same character (as we have seen, there are strong indications that he did), but simply because there is no definitive, published, proof of this.'

Once again it is theory attached to this Glorfindel story. I happen to like your version better.

by bruce rerek
Lindariel, I would have agree. There is nothing wrong with a little ambiguity, and I rather suspect that Tolkien wanted to have a link to the First Age and the Third. As we have discovered, the histories of the Ages could not possibly fit into the Lord of the Rings. Just a side note, while I was searching for a certain White Lady in the Silmarillion, I came across the fact that only three of the nine black riders Numenorians.
by Merry
Tolkien says a few times in his letters that he purposely left some things unclear or ambiguous because that's the way real life and real history are. I love this about his writing.
by Iolanthe
It's interesting that the Glorfindel dilemma has been picked up here. After reading this chapter again last year (and the Encyclopedia of Arda entries) I made notes on anything I could find on reincarnation as I read through Unfinished Tales:


Narn I Hîn Húrin
Sador to Turin about the Elves:

'From wounds and griefs that would slay men they may be healed; and even when their bodies are marred they return again, some say. It it not so with us [men].'

'May Mandos judge him justly; and if ever he return to the lands of the living, may he prove wiser.'

We can see that Tolkien was talking about a different Glorfindel when he wrote this chapter, but the idea of Elves reincarnating does appear in scattered texts.

- so if any one wants to discuss this bit further I'll see you on the General thread - do certain men reincarnate? In the Unfinished Tales under one of the footnotes to 'Disaster of the Gladden Fields' Elrond recalls how great was the likeness in body and mind between King Elessar and Isuldur's eldest son Elendur who would have been King, but who died in the same Orc attack as his father. Elessar was 38th descendant of Valandil, Elendur's brother.

Bit of pure specualtion there

Back to the Chapter discussion!
by Merry
On my first reading of LOTR, I remember being so relieved, with Frodo, at the sound of tinkling bells as they heard the unknown rider approach. Frodo even says something like, that doesn't sound like a Black Rider. Indeed not!
by Iolanthe
One of the interesting things in this chapter is Frodo's wound and the parallels between this and the sickness Eowyn and Merry fall into after encountering the 'Pale King' at the Pelennor Fields. We get our first mysterious glimpse of Aragorn as a healer but Frodo's wound is beyond Aragorn's help as a splinter from the dagger is working it's way to his heart and only Elrond can cure him. Despite this we get another of those early clues that there is really something more to Strider, even though at the start of the chapter Sam is still having doubts about him.

We also see the 'deadly wound' as a device to explain why the Black Riders retreat rather than finishing everyone off at Weathertop. After all, they are the epitome of evil terror and power. Aragorn says:


They are only waiting, because they think that their purpose is almost accomplished, and that the Ring cannot fly much further. I fear, Sam, that they believe your master has a deadly wound that will subdue him to their will. We shall see!

Without this and the Rider's horses mysterious aversion to water it's impossible to see how Tolkien could ever get his heroes to Rivendell.
by Merry
I think it's interesting that Tolkien made fear the chief weapon of the Nazgul. If people could just overcome their fear, the Nazgul are not so formidable. But fear is powerful. I wonder if that is another wartime lesson learned by our author.
All times are UTC
Page 1 of 1