FoTR - At The Sign Of The Prancing Pony: Bk I, Chapter VIIII

FoTR - At The Sign Of The Prancing Pony: Bk I, Chapter VIIII 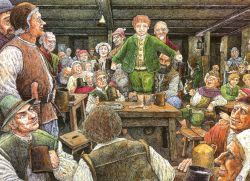 It is at Bree that we see not all ill intentions come from Black Riders. Men 'from the South country' also are mysterious and dark. Here we also see Hobbits, Big People and Dwarves conversing together giving us a more 'worldly' view of Middle-earth. Tolkien introduces us the illusive race of men called Rangers who are ‘believed to have strange powers of sight and hearing, and to understand the languages of beasts and birds.'

Let us discuss the ramifications of the mysterious disappearence of Frodo and any other topic from this chapter.

OK after reading this chapter for only the second time I caught the dark figure climbing over the baricade wall when the Hobbits enter Bree. My first thought was a spy but then I thought maybe it was Strider.

First person that comes to mind is Bill Ferny, since he did a great deal of skulking & spying on Frodo and co. Climbing over barricades didn't seem like Strider's *style*.
O Elbereth! Gilthomiel!
We still remember, we who dwell
In this far land beneath the trees,
Thy starlight on the Western Seas.
Top

I think it must have been Strider, didn´t he say he followed them secretly through the gate?

The Hobbits are still careless, although they have been in great peril on their way to Bree, they seem to forget everything when they are in the jolly inn. You wonder if they will ever learn to be more cautious, on the other side you have to admire their ability to forget danger so fast. Also Merrys courage to follow the black shadow, you start to believe that Gandalf had been right when he said that Hobbits were made of harder stuff. But still you think with their silliness they will get into trouble again and again. But, as always unexpected help is on the way. We finally get introduced to Aragorn.

What moved me most was his statement that he hoped to convince the Hobbits that they could trust him without the help of Gandalfs letter. Is he tired of travelling, always in disguise, not able to reveal himself to anybody? All those long years waiting and preparing for his task in secret, a future, he doesn´t know if it ever will come true. Who wouldn´t despair at times?
As you see, I love this chapter.

I also thought the figure following them over the gate was Strider. I'm trying to remember how long it took me, when I first read LOTR, to be certain that this 'Strider' was going to be a good character in the book and not a villain in disguise, just as Sam was worrying about the same thing. When Frodo disappears in the bar in front of this rather secretive and shady character I remember thinking initially that they were all in deadly peril! We also get Frodo's first suspicion that the ring is working on its own and 'played him a trick' at some 'wish or command' in the room, and we quickly get to know that Strider seems to know Frodo's secret business.

I do love the ridiculous song about the Man in the Moon which is up there with Lewis Carroll for nonsense verse.
Now let the song begin! Let us sing together
Of sun, stars, moon and mist, rain and cloudy weather...
Top

It is definitely Strider. He says so in the next chapter!


Now, I was behind the hedge this evening on the Road west of Bree, when four hobbits came out of the Downlands. I need not repeat all that they said to old Bombadil or to one another, but one thing interested me. Please remember, said one of them, that the name Baggins must not be mentioned. I am Mr. Underhill, if any name must be given. That interested me so much that I followed them here. I slipped over the gate just behind them.

Lindariel it has been a year since my first reading of this book. I had forgotten that part within the next chapter.

It is hard not to throw in more information from other chapters while doing this one chapter by one. Everything is so intertwinned.

) and having to wait for him to remember it again.
Aiya Earendil Elenion Ancalima!

But I like Gandalf's later description of Butterbur: that he can "see through a brick wall in time." (That has become my family's way of saying that a person is smart enough, but only just!) Butterbur turns out to be a stout ally. His indignation that his good bolsters were ruined by the Nazgul attack is good, righteous indignation!

I love the homey meal that the hobbits get at the Prancing Pony. I read some account by one of Tolkien's buddies that those were his favorite foods: cold meats, cheese, hot soup, bread and butter, a tart for dessert, and good ale. Yum!
Sing and be glad, all ye children of the West,
for your King shall come again,
and he shall dwell among you
all the days of your life.
Top

When I first read the book at the age of 12, I wondered what Aragorn was doing behind the hedge, then decided he probably had to go to the bathroom. Mundane workings of the mind of a kid.

Anyway, what I originally meant to "say" is that I really like the atmosphere of the inn - something copied a thousand times for various fantasy novels, but never captured quite as perfectly: at the same time a dark threat hanging over it all, and yet there is jolliness that reaches out and captures you, though without driving out the sense of darkness completely.
Tracking the sun in his galleon and travelling the skies
'Til his splendour was shorn by the birth of morn and he died with the dawn in his eyes
Top

I've always thought that if we could visit Middle-earth it would be a great place to stay and spend a few evenings by the fire, watching all the different visitors. I would, of course, have to have a hobbit room with round windows or nothing.
Now let the song begin! Let us sing together
Of sun, stars, moon and mist, rain and cloudy weather...
Top

And what height are you, Iolanthe?

Maybe I could sit by the fire and pretend to be a really small Ranger?

And food, yes. Though I'd like to try lembas first... In my imagination, they sort of taste like shortbread, but without the icky gingery bits.

And I'd try the beer, no doubt, since Aragorn drinks it. I'm not a big one for beer myself, I don't really like it.
Tracking the sun in his galleon and travelling the skies
'Til his splendour was shorn by the birth of morn and he died with the dawn in his eyes
Top

Fairly vertically challenged, but I still might have to stoop to get in and have to dangle my feet outside the bed, but the Hobbit rooms sound so nice and cosy it would be worth it

I've never thought of Lembas like shortbread - it now sounds quite nice. I suppose I've always thought of it like Farley's rusks with added va va voom.
Now let the song begin! Let us sing together
Of sun, stars, moon and mist, rain and cloudy weather...
Top

I guess I've always thought that Tolkien had eucharistic bread in mind, at least in part, when he wrote about lembas. The thing that kind of gives it away is that he says that one gets stronger the more one relies upon lembas alone, and Catholics of his generation would have heard stories of saints that lived on communion bread alone. (I'm not making any claims about the veracity of these stories!) Also, the eucharist is often called 'bread of angels' ("Panis Angelicus" for those who have heard the old Latin hymn), and I believe Tolkien says in a few places the elves are sort of angelic.

So, this is a very long introduction to what I thought lembas must taste like when I read LOTR first at age 10. This was right after Vatican II, and people were experimenting with communion bread, making it out of whole wheat and honey rather than the white thin wafers. So lembas always seemed like it would taste like hippy communion bread! (Okay, Professor, you may commence rolling in your grave!)
Sing and be glad, all ye children of the West,
for your King shall come again,
and he shall dwell among you
all the days of your life.
Top

Wouldn't want to live on communion bread. Doesn't sound like a healthy diet.

What are Farley's rusks?

Do Rangers ever take their kids along?