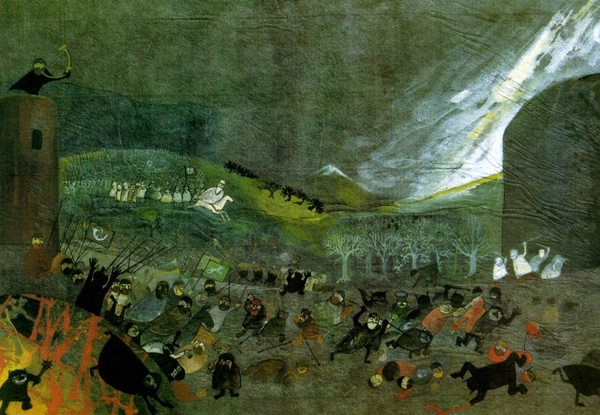 This thread is designed to catch the posts for all three books of LoTR. Whether it be philosophy, character development or observations, please feel free to start the conversations here.

Thanks Philipa, this is a great idea

. And I love the choice of the Cor Blok painting!
Now let the song begin! Let us sing together
Of sun, stars, moon and mist, rain and cloudy weather...
Top

I like Bloks renditions but that's for another thread.

I've been rereading the three books this autumn and every time I do I always have something to say about them.

This time while reading in The Return of the King I was moved by the discussion in the chapter entitled The Last Debate. Remember it begins with Merry, Pippen, Gimli and Legolas have reunited after the war on Pelennor Fields.

To me the passages reflects the beginning of the end of the Middle-earth that once was before the Dark Lord started to rumble. It is the time when the discussion is turned to the race of Men and their destiny is to outlast all other races and dominate Middle-earth.

Gimli and Legolas have just spoken to Prince Imrahil;


'That is a fair lord and great captain of men,' said Legolas. 'If Gondor has such men still in these days of fading, great must have been its glory in the days of its rising.'

'And doubless that good stone-work is the older and was wrought in the first building.' said Gimli (he is referring to Minas Tirith). It is ever so with the things that Men begin: there is a frost in Spring, or a blight in Summer, and they fail of their promise.'

'Yet seldom do they fail of their seed,' said Legolas. 'And that will lie in the dust and rot to spring up again in times and places unlooked-for. The deeds of Men will outlast us, Gimli.'

'And yet come to naught in the end but might-have beens, I guess,' said Gimli. 'To that the Elves know not the answer,' said Legolas.

Of course than poor Legolas sees the gulls and starts yearning for the sea and the havens. Gimli and Merry tell him not to go for they'll miss him and the "fair folk".

) and Frodo's sadness of never going 'home' again, I find so sad to read.

I think if I didn't know this world was fiction I'd feel as though the world has lost another endangered species.

The discussion points out the truly altruistic nature of the quest for Gimlii, Legolas, and the Hobbits, even Gandalf--they are hastening the end of their own time to save the world for Men. The thought adds layers of poignancy to Frodo's declaration that "we set out to save Middle Earth, and we did, but not for me."
Many live who deserve death; some die who deserve life--can you give it to them, Frodo? Do not be so quick to deal out death in judgment. Even the wisest cannot see all ends.
Top

I can't believe that I've never thought of it like that before, Librislove. It's not just the elves that are passing, ultimately the Hobbits and Dwarves fade from view until they are just old tales and shadows in the woods and caves. The dwarven empires have already dwindled by the end of the book and although the Hobbits are still going strong I like to think that Tolkien hoped that the Hobbits had just got very good at hiding

. Perhaps getting a bit taller, calling themselves Tolkien and hanging out in the Eagle and Child with a pipe, a pint and lots of strange stories

All the last chapters of LotR are bitter sweet. Tolkien really understood that after so much pain and sacrifice a true 'and they lived happily ever after' ending wouldn't cut it. That most 'live after' at all is a great joy and the sadness of all the partings and the realisation that the world will never be the same again but you just have to get on with it keeps it realistic.
Now let the song begin! Let us sing together
Of sun, stars, moon and mist, rain and cloudy weather...
Top

Exactly Iolanthe--it's that touch of realism that makes LOTR a great Story as opposed to a good story--capitalization intended. It's comforting to think that hobbits did get a bit taller and mingled with the big folk- hobbit ancestry is such a marvelous excuse for being short and portly, like yours truly.

Many live who deserve death; some die who deserve life--can you give it to them, Frodo? Do not be so quick to deal out death in judgment. Even the wisest cannot see all ends.
Top

I also see in the quote I've posted the rise and fall and resurrection of Men how we've come to know it. Great civilizations come and go. The cyclical nature of Men is pointed out to us by Tolkien again.

It appears it is war that creates the catalyst for the rise of Men. This can be said of some of our earthly societies as well.
Aiya Earendil Elenion Ancalima!

The timing of this exchange between Legolas and Gimli is also interesting; it takes place right on the edge of the triumph of the greatest Man of the Third Age, indeed perhaps of any age of Middle Earth. Perhaps it is Tolkien's warning that we should not take overweening pride in the achievements of singular men like Aragorn, for they are few and far from the ordinary run of men. They can bring the age of flowering that Gimli and Legolas describe, but after them comes the frost and blight. Tolkien's unfinished tale of the fourth age of Middle Earth, which seems to describe a returning darkness, and his own remarks in his letters that indicate Aragorn was as high as Men could reach, seem to bear this out.

It's also interesting that Legolas points ot Men do not fail of their seed, for it is Men, and to a certain extent their close kin the hobbits, who seem to have no trouble reproducing, while dwarves have very few children by their very nature and Elves the same by choice. Perhaps numbers alone make Men the inevitable Inheritors of the Earth. And they have a vested interest in life in Middle Earth, since unlike Elves, they have no other place they can go.
Many live who deserve death; some die who deserve life--can you give it to them, Frodo? Do not be so quick to deal out death in judgment. Even the wisest cannot see all ends.
Top

librislove wrote:Perhaps numbers alone make Men the inevitable Inheritors of the Earth. And they have a vested interest in life in Middle Earth, since unlike Elves, they have no other place they can go.

Thanks, Philipa! The only use I can ever see for having the flu is that it can give you time to think--but one is never sure the thoughts will actually make sense to anyone!

Happy Viggo's B-Day!
Many live who deserve death; some die who deserve life--can you give it to them, Frodo? Do not be so quick to deal out death in judgment. Even the wisest cannot see all ends.
Top

I wish I could think as clearly when I've got the flu! Hope you are feeling a bit better today

I think you're right about men's strength being both in numbers - they die so their 'seed' is their only grasp on the future - and in the fact that Middle-earth is their only world. The West has never been open to them. Their lands in Middle-earth are all that they will ever have in life and in death there is only mystery.

Their focus is different and wider than elves, dwarves and hobbits. More 'present' than the elves, less obsessive and introverted than the dwarves and less parochial and tied to the earth than the hobbits. It's inevitable that they are the final inheritors of Middle-earth.

That quote from Legolas' and Gimli's conversation is very thought provoking, Philipa, and shows that great themes run through Tolkien's work in even the quiet and intimate moments.
Now let the song begin! Let us sing together
Of sun, stars, moon and mist, rain and cloudy weather...
Top

Great discussion! I wonder if there is anything in the Sil about the dominance of Men being the will and plan of Eru.
Sing and be glad, all ye children of the West,
for your King shall come again,
and he shall dwell among you
all the days of your life.
Top

Have a virtue to shape their life, amid the powers
and chances of the world, beyond the music of the
Ainur, which is as fate to all things else.....

This may reflect Iluvatar's ultimate plan for Men to be the inheritors of the world, and the theme is bolstered by the assertion that "Yet of old
the Valar declared to the Elves in Valinor that Men shall join the the Second Music of the Ainur ...", while he has made no such revelation or promise to the Elves.

Lest men feel too superior, though, Iluvatar also "knew that Men, being set among the turmoils of the world, would stray often,and would not use their gifts in harmony," though all they did would in the end reflect his glory.

Not conclusive, but interesting, and clearly demonstrates that Men had a special place in the heart of Eru, whether or not the Elves believed it.

Many live who deserve death; some die who deserve life--can you give it to them, Frodo? Do not be so quick to deal out death in judgment. Even the wisest cannot see all ends.
Top

Yes! Thanks, librislove. I think we see here some of his Catholic intellectual heritage in regard to fate and free will: the elves, for the most part, freely choose to hang on to the past and their powers and art and lore and all those good things, but this choice means they are somewhat ineffective in the world, opening the door to their lesser cousins--as Iluvatar knew they would!
Sing and be glad, all ye children of the West,
for your King shall come again,
and he shall dwell among you
all the days of your life.
Top

It needs but one foe to breed a war, not two, Master Warden, and those who have not swords can still die upon them. Would you have the folk of Gondor gather you herbs only, when the Dark Lord gathers armies? And it is not always good to be healed in body. Nor is it always evil to die in battle, even in bitter pain. Were I permitted, in this dark hour I would choose the latter.

So merry, your thoughts on this please. I think Tolkien was right when he said it takes 'one foe to breed a war'. It certainly only takes one to start one don't you think?
Aiya Earendil Elenion Ancalima!