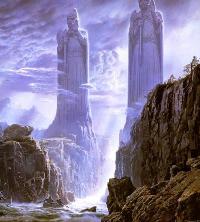 After the long sojourn in Lothlorien the Fellowship is finally on the move again and they are not alone as it’s clear that Gollum, with all his talents as a waterman, is still following them. Even worse, a terrifying winged creature has flown over them and the journey down the river is proving far more difficult than anyone thought.

The Fellowship is stricken with indecision and the way is no longer clear, even to Aragorn who is now leading them. But as they approach the Argonath, the great Pillars of the Kings, we get a glimpse of the returning King of Gondor in Strider even as he wrestles with the difficult choices before them.

This is another short chapter but one that tells us that the journey is going to be a very different one from this point onwards!
Now let the song begin! Let us sing together
Of sun, stars, moon and mist, rain and cloudy weather...
Top

Shall I kick this off?

I'm thinking back to the very first time I read LotR and what I mainly remember is that at this point in the book I felt very uneasy. Lothlorien was a rest and recuperation for us readers as much as for the Fellowship but once the Fellowship set out again I felt a great anxiety. Where were they going first? How would they decide the right course to take? Would they suceed without Gandalf? What about Gollum? Tolkien is less than reassuring - everything seems to be falling apart here and even the river becomes a difficulty.

I remember a huge sense of forboding as though they were suddenly all unprotected - even after losing Gandalf they came into the protection of Galadriel and Celeborn. At this point they are all horribly vulnerable and the story could go almost anywhere!
Now let the song begin! Let us sing together
Of sun, stars, moon and mist, rain and cloudy weather...
Top

I shared all of those feelings as well, Iolanthe. Also, they were traveling through a "wide and empty and mournful" country (Frodo's description) in which they were highly visible. Tolkien particularly treats us to Sam's sense of uneasiness -- both from being in a boat (a highly precarious mode of transportation from his point of view) and from his sense that the party is so very naked and exposed. Sam also has little to do except watch his master become more and more uneasy and unable to sleep or eat, observe Boromir's growing obsession with Frodo, and finally catch sight of a mysterious log with eyes.

Yes: this is definitely a kind of moody chapter. The only break is Aragorn's 'transfiguration' at the Argonath. I'm away from my books right now, so I can't quote the passage, but it describes Aragorn suddenly becoming kingly, a brief vision, I guess, of what he will become. This happens several times during the LOTR, and I find it an interesting literary device.

I think Tolkien also describes Boromir as sitting in his boat biting his nails. Now that's tension!
Sing and be glad, all ye children of the West,
for your King shall come again,
and he shall dwell among you
all the days of your life.
Top

It's a deeply unsettling chapter, isn't it - I scanned it again briefly before I came to work, and the sense of foreboding which Iolanthe mentions pretty much sums it up. Nobody is at ease, Gollum is lurking around, at one point the group are attacked by Orcs, and Legolas has to shoot a winged creature - presumably a Nazgul, or similar? - which appears above them (I particularly liked the phrase about Legolas's "dark head" being "crowned by stars"). At one point Boromir is sitting in one of the boats muttering to himself - he's really starting to lose it, as Merry & Lindariel have pointed out.

The only relief in all this is the 'transfiguration' of Aragorn which Merry has mentioned - the Argonath, where it takes place, is just as they pass into Gondor and that crossing of the border is what brings it on.

Also in this chapter Legolas spots an eagle. From what I can remember this is something significant to do with Gandalf, isn't it?
"Torment in the dark was the danger that I feared, and it did not hold me back.
But I would not have come, had I known the danger of light and joy."

You're right marbretherese. That is probably Gwaihir taking Gandalf to rest and recuperate in Lothlorien after his fateful encounter with the Balrog or returning from that mission.
Lindariel

Its a very engaging chapter where Tolkien weaves the narrative to create the illusion of boundless time as we travel with the Fellowship. The great river is time and it is fluid, unending, and treacherous. As we have noted the crafts we are given, although quite up for the task are vulnerable to both nature and to threats from those who would harm us. They even have to re-orientate themselves to the current time after leaving Lorien and to a barren country that is formidable as the task that is before them. Dread appears in the flesh as a winged creature (Nazgul) freezes their blood, yet like all fearful and fell things, it is not fully seen or named.
Fog appears and water and air are united. The metaphor of time as a river in enunciated by Legolas: "The passing seasons are but ripples ever repeated in the long long stream." As the fog and mist lifts Aragorn and company behold the Argonath and his visage now becomes bright and kingly. One also must recall that it was through Emyn Muil that the Elendil led Gondor against Sauron where Isildur cut the ring from his hand. Ripples of time repeated again and again.
Bruce
Mornie utlie
Believe and you will find your way
Mornie alantie
a promise lives within you now
Top

I like your analogy of the river with time, Bruce, especially, as you say, they are now back into normal time after the slow passing of time in Lothlorien! It's easy to forget the effect of that transition.


Lindariel wrote:You're right marbretherese. That is probably Gwaihir taking Gandalf to rest and recuperate in Lothlorien after his fateful encounter with the Balrog or returning from that mission.

I love the way that Tolkien was so meticulous with his timelines that he can chuck in a parallel event almost as an aside - it all adds to the richness of the story. It reminds me of Tuor at the Pools of Irvin seeing an armed man with a black sword and not knowing him as Turin hurrying north after his meeting with Glaurung. Two great stories clashing together in one moment of time.

That's a good observation, Lindariel, about how Sam now comes to the front in the storytelling - readying us for the lead he takes in the rest of Frodo's journey.

All the uncertainties of this stage of the journey are added to by Aragorn's not reckoning on the speed of the river and nearly bringing them to grief on the rapids because they are further down that they thought: 'I am out of my reckoning' he says after Boromir's warning. Somehow you expect him to know everything and it's a real reality jolt that adds to the general unease.
Now let the song begin! Let us sing together
Of sun, stars, moon and mist, rain and cloudy weather...
Top
Post Reply
8 posts • Page 1 of 1