Myths: 'The Hero with a Thousand Faces' discussion

Myths: 'The Hero with a Thousand Faces' discussion

by Iolanthe
The Hero with a Thousand Faces Discussion 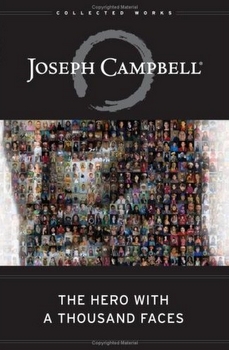 
The Hero with a Thousand Faces is a hugely influential book, written in 1949 by Joseph Campbell. It’s a fascinating and challenging study of the Hero Myth in world mythology and what it means for everybody – men and women – today. This is a book that is not about the differences between world myths but about their similarities, as Campbell digs for ‘the basic truths by which man has lived throughout the millenniums of his residence on the planet’ [Campbell].

We know that Tolkien had an interest in Campbell’s work. In our discussions about Tolkien’s heroes, the Hero Archetype in its various forms and Campbell’s insights have come up many times. Many of us have either read the book or are about to do so to enhance our understanding of the mythological background against which Tolkien’s hero’s stand. No one, I believe, has produced a wider group of heroes than Tolkien. Aragorn, the King in Waiting, Tuor and his belief in his destiny, Turin and his Fate, gentle Faramir and fiery Boromir, Bilbo, Frodo and Sam proving that even the smallest person can change the course of history. There is a hero in Tolkien for every kind of traveller and for every kind of journey.

We plan to start discussing the book in mid July, giving ourselves a month to start reading. I hope many of you will join in!


It would not be too much to say that myth is the secret opening through which the inexhaustible energies of the cosmos pour into human cultural manifestation. Religions, philosophies, arts, the social forms of primitive and historic man, prime discoveries in science and technology, the very dreams that blister sleep, boil up from the basic, magic ring of myth.

Joseph Campbell: The Hero with a Thousand Faces.

by Merry
I'm really interested in this discussion! I've started reading the Campbell book, which is dense and academic, but a tour de force of world mythology. I can see why it is seen as the source on this subject.

I have some questions I'll be interested in exploring:

Did Tolkien know of Campbell's work and consciously include motifs from the Hero's Journey in his legendarium? Or did Tolkien just know the literature so well that he made the same kind of summary that Campbell did, in different form? What are the motifs that we find in the legendarium?

I've read that Campbell didn't like LOTR and I wonder why!
by Iolanthe
Good questions! I think that Tolkien was so steeped in myth that he found his own path, which he started on when he was very young. Campbell makes much of the fact that myths rise out of the subconcious, which is why the same myths are told over and over again by different peoples the world over. Tolkien was very open to all the images which surfaced in his imagination, weaving them into his stories. He believed in them. He was a channeller of the great myths, giving them a new voice.

I'm very surprised Campbell didn't like LotR. I can only think that he didn't know enough about Tolkien (after all, things like the Sil came out very late) and therefore didn't know how Tolkien practised, naturally, a lot of what Campbell himself preached. By that I mean his conviction that myths are alive today, still surfacing and finding new forms.

I think the huge success of LotR is because Tolkien was so in tune with the inner mythos that everyone longs to get back in touch with. When he published LotR they recognised it and identified with it, they knew it had something important to say. I would have thought Campbell would have recognised that - but I suppose it's possible to do so and still not like something!
by Merry
I searched the 'net long and hard to find something about the connection between Campbell and Tolkien, and now I can't remember the source! So we must take that with a grain of salt. If indeed Campbell didn't like Tolkien, it might have been because he thought it was kind of a pseudo-myth, created out of the bits and pieces of the real thing. Still, so many more people connect with Tolkien! Anyway, I'm going to keep searching for connections.

I don't know what to think of the 'collective subconscious' idea that Campbell borrows from Jung. I don't know if I buy it. It seems to me that a more plausible explanation for the 'monomyth' is that there are some common factors of human experience that all people experience, no matter the time or place, and that we wonder about and mythologize about their causes and origins. Modern people think we've got it all explained by science, I guess, but then why are we still moved by myth?
by Iolanthe
Maybe Campbell's dismissal of Tolkien's work is one of those apocraphal stories that don't have a source, or it was a throwaway comment in one of his many lectures. He could have seen it as pseudo-myth without the benefit of all that background that got published long after LotR.

I find the whole idea of the Collective Unconcious intriguing and have read a lot of Jung (nearly all now forgotten). I don't think I'm 100% convinced by it, but it is one explanation of why there are some universal symbols in the histories of very differing cultures that could never have had contact. Maybe I'm about 60% convinced

I've started re-reading the Campbell book now and I'm just as intrigued by it as I was the first time round!
by Merry
I think I am less than 60% convinced, but I have to admit that I'm not reading it very carefully--it is so packed full of content that I'm kind of breezing through, looking for the punchlines!

I was just thinking that I haven't done justice to Campbell above: he says a few times that the psychoanalytic approach is just one that might be used and that the others have validity as well. I get the impression that he thinks that there may very well be a sort of Great Beyond that is the Really Real, and that this all may not solely be our subconscious yearning for the mother's breast!
by Iolanthe
Yes - he's doesn't take a closed or simplistic view of these things. I've read a lot of Campbell and he sees myth as a gateway and guide for great and mysterious journey. You can analysise it (as he does) and take different approaches, but he sees beyond the study to great truths about what it means to be human and live in the world. I don't think he ever loses sight of that.
by marbretherese
I'm about two thirds of the way through this book and enjoying it, frankly, far more than I thought I would. I really like Campbell's idea that myths guide us to a sort of cosmic Truth. But I do find some of the Freudian references a little creaky - the world has moved on since the 1940s!
by Lindariel
Ach! I am so behind with work, and I have two lovely books singing their siren songs at me -- The Hero with a Thousand Faces AND The Legend of Sigurd and Gudrun. Will try to catch up as soon as I can, but I am REALLY enjoying the conversation here. It lets me know what I'm missing!
by Merry
Ah, yes, siren songs!

I have been reading along steadily, but waiting to start the conversation in earnest on July 15. I'd enjoy going through each element of the monomyth to see if we find it in Tolkien.

Marbretherese, I do find the psychoanalytic foundation of this theory the weakest part, too. I find myself reading some of this stuff and saying to myself, 'Oh, come on, really?'

by Iolanthe
Yes - this is the one element that jars. But the book is a book of it's time and Cambell continued to write and analyse myth long after this book and you can see him moving forward from this.

That said, this is still his most forceful analysis of the Hero Myth and much of it lingers in the mind long after you've read it.

I really need to catch up - I've only just started it as I've also been reading Sigurd and Gudrun. I'm glad you also have it, Lindariel, as I'd enjoy a chat about that when you've finished it!
by marbretherese
I also have a copy of Sigurd & Gudrun which Jonick gave me. I haven't got round to reading it yet

But I will!!!
by Iolanthe
As someone with an interest in the different forms of poetry you'll love it. Personally I think it's wonderful and Christopher Tolkien's notes and appendices are fascinating.

.
by Athelin
Have just ordered Campbell's book - have checked his Wiki entry yesterday and found it fascinating. Sounds like I will like his writings - shame on me that I hadn't heard of him yet, although I studied lots of mythology

Regarding the Sigurd + Gudrun book - is it right that there is no paperback edition yet? The hardbound copy is rather expensive, that will have to wait a bit..... But I read the original Volsung saga.
by Iolanthe
No - the paperback should be out sometime next year, I imagine. It's only just been published. But I'm sure reviving the conversation and coming at it fresh again at some later point would be fun! We may all have new things to say by then.

If you are into myth you'll love Campbell. His insights give a lot of food for thought!
All times are UTC
Page 1 of 4